Fed up with arguing?

We know what’s it’s like. You’ve recently separated (or perhaps you’re fast coming to the conclusion that that’s what’s best) and there are things you need to resolve or talk about but despite your best intentions all discussions end in an argument. Perhaps it sounds like the same argument each time even though there are different trigger that start it off?

You don’t want to argue. You are completely drained by it. You just want to find a resolution or a way forward but you and your ex-partner are locked in recurring angry exchanges about things. You have tried to keep things amicable but it is just impossible when even simple conversations can’t even stay civil. You’re very aware of the impact on your children and that they don’t like the arguments. Maybe their behaviour has changed? They might be a little more withdrawn or perhaps they are arguing too?

You feel that these things shouldn’t be so difficult to sort out but every thing that’s said seems to be heated and inflammatory right now. It’s often easier to say nothing but that seems to cause an argument too.

Most couples have the same argument over and over again. It might be an unresolved issue that presents itself even when the starting point of the discussions seems to be about something different. Or it might be because one or both of you have a particular sensitivity to a particular issue or subject and that makes you react. Whatever it is it may help to know that lots of couples (whether they’re still together or have made the difficult decision to separate) feel like they’re having endless arguments and feel fed up, drained and wiped out by it.

The good news is that there is absolutely another way. It often feels impossible but our experience as mediators has taught us that often what you need are a few tweaks in the way that you approach these conversations to elicit a different outcome. That’s ultimately what you want for things to go differently and for you to reach an outcome. An accommodation on the next steps you need to take regarding a particular issue.

Sometimes it’s when and where you’re having the conversations – if you’re both already tired and irritable then they are more likely to end up pushing buttons and with getting heated. Perhaps a few language tweaks or being more mindful of sensitive subjects will help? Occasionally it can be that you’re trying to resolve too much in one go.

If this sounds like you and you feel you simply can’t have another argument then fear not because we have a free resource that we think will help. It’s a downloadable PDF with 5 top tips for swerving another fight. They’re tips we’ve put together from our extensive experience of working with separating couples and studying conflict. 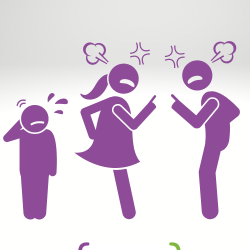 Want to swerve another fight?

Sign up for our free PDF with 5 tips to avoid all discussions ending in argument.  You’re tired and drained and you simply don’t want another fight.  Use our tips to help keep things constructive.

As a special thank you for downloading our video you can now purchase our Mini Guide to Separation for £8.99 instead of it’s usual price of £14.99. You might not need this if you decide to stay together but it can also be useful in helping you decide what to do. To do this click here and use coupon 7U6B4RT8 at the till. This is a one time only offer only available now and isn’t offered anywhere else.

We use cookies to ensure that we give you the best experience on our website. If you continue to use this site we will assume that you are happy with it.OkRead more