One of the things you hear as a mediator is something that sounds like one of the following:

From a mediator’s perspective there can be a multitude of reasons for this and many of them are not permanent but temporary issues.  Since it’s something that crops up a lot it seemed to be helpful to write a blog about this and to go over some of the reasons for this.

The grieving and recovery process

If you are a follower of this blog then you might be familiar with this already.  There is a specific blog all about this.  For those not familiar with this issue the graphic below may be helpful.  It sets out a visual representation of the healing or recovery process and the emotions that those travelling it will go through.  The top line tends to be followed where somebody met someone else, but someone (in my experience) can follow this line where they feel guilt about ending the relationship even if they are not in a new relationship.  The bottom line is followed where the person hasn’t formed a new relationship.  But separation is not one size fits all so people don’t always follow it exactly: they may yo yo between lines, or they may take two steps forward and one back, or even skip an emotion.  You can download your own copy of this by clicking on the link below. 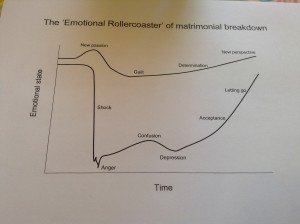 It is enormously common for the two parties involved in the separation to be at very different stages in this process and that in itself can mean you feel like you are not talking the same language.  In fact it was once described to me by an experienced and well respected mediator as though each person speaks a different language at each emotional stage.  You can imagine that if one person is speaking Japanese (for example the anger phase) and one person is speaking French (the acceptance phase) this is unlikely to be a fruitful or productive conversation.

Picture this:  one person has felt unhappy in the relationship for some time.  This often manifested itself as just not feeling quite right, and a bit lost.  But they felt they needed to focus on their children and it wasn’t bad all the time so they tried to forget about the negative feelings.  They did suggest relationship counselling to their partner but the partner felt they didn’t need this and suggested it was just the loss of their dad and they would feel differently once they had grieved.  Over time they found the feelings coming back more and more until eventually, after a long period of soul searching and worrying if they were doing the right thing, they came to the conclusion that the marriage was over.  At this point they communicated to their partner that they wanted to separate, and at this point they may have already hit the acceptance phase.  The other person in the relationship recognised that there had been difficult moments in the relationship but put this down to the fact that all relationships have their ups and downs.  Plus it was difficult when the children were younger juggling both jobs and the multitude of activities.  They also felt their partner was hard hit by the loss of their dad and that was bound to upset things.  They thought things had been better lately and had been happy and felt very in love.  They are shocked and devastated that the other person wants to end the relationship.  They’re hoping it’s just a period of upset and that counselling will get them back on track.

Sometimes the person who is at the acceptance phase wants to move on quickly.  They have put their life on hold for too long and now they want to start the next phase.  But the other person cannot make rational decisions or even accept the breakdown of the relationship.  They are still shocked and in denial about what has happened.  They often still believe the feelings won’t be permanent and they will be able to reconcile.

You can see here why each party might think the other is on a completely different page.

Each party talking a different language for reasons set out above, can be a major factor in communication problems and each party feeling that if they say black the other says white.  Separating couples often describe one of the following scenarios:

These difficulties can be as a result of being at different phases in the recovery process.  They can also be that both parties don’t have the skills to communicate with the other.  So many clients have told me that they are good at their jobs and really good at communicating at work (they may even work in communications or other such profession that relies on good communication skills) but they describe not being able to communicate with their partner.  There can be a number of reasons for this and here are a few:

Does this give you some idea as to what might be causing the difficulties between you and your partner?  Do you recognise either of yourself in the points above?  Understanding the difficulty behind your communication problems is key to putting them right.  There is a saying that has been attributed to Albert Einstein, “Insanity:  doing the same thing over and over again and expecting different results”.  If you keep approaching conversations in the same way and saying the same things and not getting a productive response then maybe you need to rethink your approach to this.  Here are some things you might want to try:

As always I will be live later in the week in the Soulful Separation Support group talking about this issue and answering questions.  This is a closed Facebook group for those going through a separation to find help and support from each other and from professionals like Louisa Whitney.  You can also sign up to the free LKW Family Mediation mailing list to get help and support in managing your separation as peacefully as possible.